Trojans three-peat as their tournament champs. 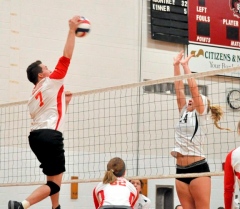 TROY - Up until three years ago Troy had never captured the title at their varsity volleyball invitational.

Now, for all of the underclassmen on this year's team they have won the tournament every year they have played it.

For the third straight year the Trojans brought home the team title, defeating Corning 25-23, 28-26 in the final on Saturday.

After winning the first game, it looked like the Trojans were in trouble in the second game.

Corning led 22-18, before Taryn Hicks served out four straight points to tie the match up.

From there it was back-and-fourth, with the Trojans three different times one point away from a loss.

However, down 26-25, the Trojans tied things up before Jenn Shults served out two straight points to win the match, the winning point coming on Hicks kills.

"I was just thinking, don't mess up," Hicks said.

Twice over the final 10 points of the deciding game the Trojans had a serve that went out, so when it was her time to serve with the game tied Shults just wanted to make sure to put the ball in play.

When they were trailing the Trojans just wanted to keep fighting back.

"We just had to take it a point at a time," Hicks said.

And, for Troy winning the tournament for the third straight year is special.

Melissa Hulslander had three digs and an assist, Jamie Patrick had eight points, two aces and a dig, Kari Ammerman had 12 digs and Abigail Storrs had a dig and two kills.

For Waverly Morgan Salsman had five points, two kills and 24 digs, Becca Morgan had five kills and a block, Jordan Raupers had 21 points, 15 aces, 30 assists, 11 kills, 16 digs and a block and Karleigh VanNess had nine points and seven digs.

Canton got 19 points, five aces, 18 digs and nine kills from Kellsy Ross and Cheyenne Fromille had 12 points, while Katie Henson had 11 points and 18 digs.

Maggy Machmer had five aces and 19 assists and Brandon Fleming had 11 kills, 26 digs and four blocks.

The Black Knights got 19 points, 17 kills, a dig and a block from Sarah Dawsey and Alacia White had 18 points, 15 kills, three blocks and seven digs, while Alaina Wickwire finished with 13 kills, five blocks, five points and seven digs.

Elizabeth Schultz had two points and five digs, Kayla Brown had three kills, a block, 10 digs and 25 assists, Tara Welliver had five kills, two blocks, a point and a dig and Kayla Grimes had 12 digs.

Wyalusing got three kills from Keon Copp and five from Brooke Force. Roni Morrison had 10 kills and two blocks, Delana Szemple had three kills and Maddy Edsell had six kills and three blocks.

Maddy Eberlin had 11 assists and Alicia Tewksbury had nine assists for Wyalusing.

Force had 11 kills in the win and Edsell had seven kills, six aces and 11 digs, while Randi Huffman had four assists and two aces.

Jayde Parsons had eight points and a kill for Towanda and Becca Goodenow had five points, while Kayla Miller had two points and two kills.

Sam Peachey had four points and two kills, Sierra Allen had a point, Liz Mosier had a kill and five assists and Alex Gannon finished with a kill.

Towanda is at Troy on Tuesday.