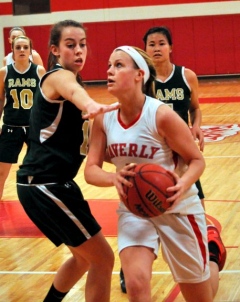 WAVERLY, N.Y. - The Wolverines outscored Wyalusing 13-1 in the second quarter to help them pull away for a 49-27 victory in the final of the Waverly Christmas Tournament.

For Waverly's players getting the title on their home court was special.

The Waverly players knew they wanted to defend their home court in the final.

"This is our floor, not anybody elses," Reylyn Schwartzhoff said.

In their opener against Tioga the Wolverines struggled at times in the first half before coming away with the victory.

On Sunday the team came out playing well, scoring 15 points in the opening quarter and at least 13 in each of the first three quarters, leading 41-16 after three quarters.

"We came out ready to play," Kylie Newman said.

"We were definitely ready to play from the start," Myers said.

The Wolverines knew they were facing a good team on Sunday so that had them fired up.

"Wyalusing is a good team, they beat Corning, so we knew we had to come out ready to play," Schwartzhoff said.

Schwartzhoff led Waverly with 16 in the game, but seven players scored in the win.

Waverly's players know how much that balance helps.

"It's definitely a different game when everyone contributes," Myers said.

Myers had nine in the win and was the tournament MVP, with Schwartzhoff and Newman, who had two, making the all-tournament team.

Jordan Raupers had nine for Waverly and Kiana Manuel had seven, while Taylor Bodine had four and Megan Wilbur finished with two.

Ally DeVoir, Kasey DeVoir and Roni Morrison had seven each for Wyalusing and Keon Copp had four, while Kayleen Sutton finished with two points.

The Crusaders took a 28-16 lead at the half on their way to the victory on Sunday morning.

Sheridan Heine led the Crusaders with 24 points and Emily Carson added 10 in the win.

Ariana Bulkley had five points and Megan Herrick and Megan O'Dell each finished with four in the win.

Kaylyn Curran finished with two points for Notre Dame and Mary Foster had one point.

Heine had five steals, three blocks and three boards and Carson had eight rebounds and a steal.

Elmira was led by Kaitlyn Weaver with 15 points and three steals.