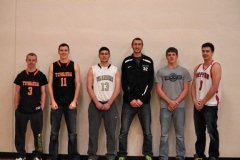 It was a good year for boys' basketball in the region.

No performance stood out more than that of Towanda's Noah Huff. Huff led the Black Knights to a second-straight NTL title and to the team's first trip to states in over a decade.

Huff is this year's The Daily & Sunday Review All-Region player of the year.

The junior eclipsed 1,000 career points this year and averaged 18.2 points a game. He was at his best in the biggest moments, including 35 in a win over Wellsboro that helped clinch the NTL title, and 36 in a district semifinal against Loyalsock.

The offensive player of the year was Nate Williams. Like Huff the Sayre junior eclipsed 1,000 career points this year and he led the region in scoring at 25.5 points a game, including a four game stretch of 40, 47, 39 and 39 points.

Sullivan County's Conner Wylie was a double-double machine and he averaged 16 points a game this year and went over 500 career rebounds during the season.

Newcomer of the year Peyton Miller of Waverly helped run the Wolverines offense, while also scoring 7.7 points a game.

The coach of the year is Notre Dame's Bill Hopkins, who helped guide the Crusaders to the Section IV, Class C title this year.

Along with Huff, Williams and Wylie the first team includes Notre Dame's Darius Garvin, who averaged 17.4 points a game and is also this year's top point guard on the All-Region team.

Athens' Dan Moyer averaged 13.4 points a game and averaged a double-double to make first team, and also be named the top rebounder.

Williamson's Troy Adriance averaged 19 points a game to earn a spot on the first team, and he is also the top shooter after making an area high 61 threes this year.