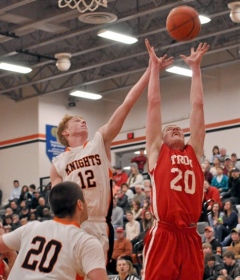 TOWANDA - Noah Huff scored 27 points and David Rodenhizer had 18 as the the Towanda Black Knights maintained their NTL lead with a 77-57 victory over Troy on Saturday night.

It was a high-scoring first quarter with the Black Knights leading 19-15 and from their Towanda just added to their lead each quarter.

Towanda stretched the lead to 35-27 at the half and 54-42 after three quarters on their way to the victory.

Noah Wheeler had 14 for Towanda and Garrett Mosier had eight points, while Nick Place had six.

Lij Griffin and Dylan Bates each finished with two points in the win.

Rodenhizer had a double-double for Towanda, adding 11 rebounds and Place had eight boards, while Bates and Wheeler each had five rebounds.

Wheeler had three blocked shots for Towanda in the game and Huff finished with six assists.

Troy was led by Jed Wright with 22 points and Brandon Mattocks had 11 in the game.

Gage Burns had nine points, all in the opening quarter and Evan Polly finished with eight points.

Ryan Reeves had four points for Troy and Thomas Swain had two, while Alex Butcher finished with one point.

Towanda won the JV game 42-27. Jarod Boardman led Towanda with 11 in the game, while Troy was led by Kurtis Roupp with eight points.

Michael Pietropola led four Wellsboro players in double figures with 16 in the victory.

Joey Doganiero finished with 13 for the Green Hornets and Kieron Smethers had 11, while Dawson Prough finished with 10 points. Dylan Prough added eight points for Wellsboro in the win.

Wyalusing was led by Cody Pickett with 14 and Dylan Bulick with 12 points.

Keshon Gardner and Ridge Williams each had four points for Wyalusing and Matt Woodruff and Kyle Tinna finished with two points each.

The Rams are at Towanda on Wednesday.

Jordan Goodwin had 22 points and 18 rebounds, along with two blocks, to lead the Panthers to their second win of the season.

Garrett Smith had seven points, four assists and three steals in the win and Elijah Arias, Andy Seeley and Tommy Rought all had four points, with Seeley adding nine boards.

Levi Upham had three points in the win and Nik Geiser had two points for the Panthers.

Susquehanna was led by Josh Wheeler with 14.

Susquehanna won the JV game 41-40 on a free throw with two seconds left. Austin Senn-Bishop led Northeast Bradford with 13 and Brady Crowner had 16 for Susquehanna.

Dan Moyer and Brandon Fauver each had 26 points as Athens rallied from a 41-29 halftime deficit to get the win on Saturday.

Jarrett Priester had seven points for Athens in the win and Tyler Forbes had three, while Ryan Segar, Austin Lister and Zane Vargason all added two for the Wildcats.

Moyer had a double-double with 19 rebounds and Lister had eight assists, while Priester had four assists, five boards and four steals and Forbes had seven assists.

Troy Adriance led Williamson with 27 and Kyle Haight had 22 for the Warriors.

Nick Cevette had six for Williamson and Josh Bradbury had five, while Matt Daily had two points in the game.

Athens won the JV game 36-28. Kalen Keathley led Athens with 17, Austin Barry had 10 and Lister had nine and Colin Heilbrun had 10 for Williamson.

Williamson is at North Penn on Monday.

Liberty picked up its third straight win, holding CV to 21 first-half points in the win.

J.J. Walker had 18 and Cody Schmouder had 16, while Cody Fritz finished with 14 in the victory.

Harley Kilmer and Dillon Ford each had four points for Liberty and Sergey June and Dalton Litzelman had two points each in the win.

Tyler Melko led CV with 17 and Dakota Corwin had 16, while Brandon McClean finished with 11 points.

Josh Nudd had seven for the Indians and Nate Bonham had two, while Ben Brubaker finished with one point.

Liberty shot 18-for-22 from the foul line in the victory.

Ben Haefka hit one of two free throws with no time left on the clock to force overtime for NRCS.

Down one with six seconds left in overtime North Rome inbounded the ball under the Wolfpack basket. Seth Winward set a screen to open up Nathan Helmuth to receiver the inbound from Johnny Mosier. Helmuth dribbled down the court and found Kyler Bert who scored on a layup as time expired to give North Rome the win.

Haefka led North Rome with 22 points and Riley Gorsline had eight, while Mosier and Winward each had six points.

Helmuth had five in the win and Bert had four, while Brandon Beers had three and Nate Gray finished with two points.

Haefka had a double-double with 16 rebounds and Mosier had seven boards and two assists.

Bo Burleigh had 14 points and 18 rebounds and Mansfield went to the foul line 35 time in the victory on Saturday.

Brady Andrws had 13 in the win and Jarrod Burd had 11 for the Tigers.

Bryce Zaparzynski finished with eight points for Mansfield and Chandler Correll had seven, while Ryan Campbell had five and J.P. Shaw had two points.

Andrews had five boards and Correll had six blocks and four rebounds, while Campbell had four boards and Burleigh added three assists.

North Penn was led by Cody Crum with 12 and Kaynen Arredondo and Konnor Manikowski each had 10 points.

Levi Christman had seven for the Panthers and Dayton Wood had four, while Dylan Rudinski had three and Ryan Bogaczyk finished with two points.

Mansfield won the JV game 36-30 with Jordan Williams scoring 21 for the Tigers.

Mansfield is at Canton on Wednesday.