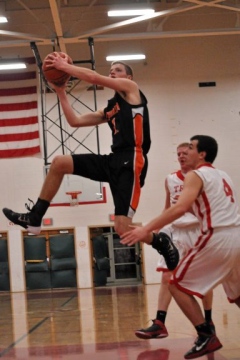 TROY - A year ago the Towanda Black Knights had a chance to wrap up the NTL title when they made a trip to Troy.

However, the Trojans postponed the Black Knights celebration, getting the win and forcing Towanda to win the league in a playoff against Athens.

On Tuesday night the Black Knights again went to Troy hoping to wrap up a championship and this time they weren't intending to come home without a part of the net.

Towanda picked up a 64-44 victory on Tuesday to cut down the nets with their second straight league-title, this one in Division I of the league.

"I couldn't be more proud of our team," senior David Rodenhizer said. "This was a real team effort. We put in the work and it paid off."

"It was a big focus in practice the last couple of days," junior Noah Huff said. "We wanted to get out there early and take a lead and take over."

The Black Knights didn't want a repeat of last season when the game was close early and Troy was able to close out the victory.

"The last game was a tight one, we wanted to come out strong," Rodenhizer said. "We played well today."

It was Rodenhizer who stole the show in the early going on Tuesday.

With leading-scorer Huff in early foul trouble Rodenhizer took over, scoring 19 of his game-high 26 points in the first half to help the Black Knights get out to an 18-7 lead after one quarter and a 34-21 lead at the break.

"They did whatever was needed while I was out," Huff said of his teammates.

For the junior guard it was nice to be able to rest the whole half and then come out in the second half with the lead and just the two fouls on him still.

Rodenhizer knew that with Huff out it was up to him to take over.

"It happened once before this year," he said. "I knew I had to step up."

Towanda led by 10 as the half was ending, but Noah Wheeler hit a three at the buzzer to end the first half with the Black Knights up 13.

While the junior was a part of last year's championship team things are a little different for Wheeler this year as he has been a starter.

"I have played a much bigger part this year," he said. "I've been happy to be able to step up."

While all championships are special Wheeler has enjoyed playing a big role in this one.

"It's a lot more special," he said. "I look forward to doing it again."

For Rodenhizer this is a good way to cap his career.

"It's nice to go out like this as a senior," he said. "We have left a legacy the last two years for people to look up to."

Winning the league was something that Towanda has been preparing for since the year began.

"Since the first day of practice we have talked about this," Huff said.

Along with the 26 points from Rodenhizer the Black Knights got seven from Huff and six from Bailey Potter, on a pair of threes. Tristan James had four points and Wheeler added three points.

Troy was led by Jed Wright with 18 points and Ryan Reeves had 10, while Evan Polly added nine and Brandon Mattocks had seven points.

Now the Black Knights have one more game today with Wyalusing and then they head to the NTL's new four-team tournament, before heading to districts.

"We can't overlook Thursday," Huff said. "After that we are looking forward to the tournament and districts."

The Black Knights know districts this year will be a challenge with two of the states top three ranked teams in Class AA, Loyalsock and Lewisburg, each in the field.

For Towanda it's a challenge they look forward to testing themselves against.

Towanda won the JV game Tuesday 52-42. Nick Innocenzo led the Black Knights with 19 and Sean Mosher had 22 for the Trojans.