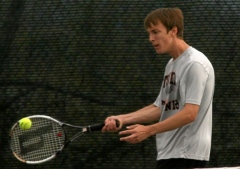 The District 4 tennis semifinals will have a very NTL feel this year as two players from the league advanced on Saturday, along with another former NTL player.

Towanda's David Rodenhizer and Wellsboro's Aaron Dillman will make another trip to the district semis on Monday, while Tyler Dugan of Galeton, a school that had been in the NTL for years, also advanced.

Rodenhizer will play Dugan on Monday and Dillman will take on South Williamsport's Christian Chioffi.

The semifinals and finals begin at 2 p.m. Monday at the West Branch Tennis Club.

Rodenhizer, the top seed, dominated in his three matches on Saturday, defeating Collin Payne of Montoursville 6-0, 6-0, Dylan Everhart of Bloomsburg 6-1, 6-0 and Matt Southerton of Mifflinburg, the eight seed, 6-0, 6-0.

Dugan got to the semifinals with a 6-0, 6-0 win over Austin Krum of Central Columbia and then he defeated Cowanesque Valley's Chandler Mastin, the fifth seed, 6-0, 6-2. Dugan beat fourth-seed Rob Smith of Selinsgrove, 6-3, 7-5 in the quarterfinals.

Dillman is the second seed and he defeated Kyle Haltenhoff of Jersey Shore, 6-1, 6-0 and Ethan Rosler of Bloomsburg 6-2, 6-0. Dillman beat Brady Fries of Selinsgrove 6-0, 6-1 in the quarterfinals.

CV's Brian Fulmer was an injury default loser and Tyler Kennedy of Wellsboro fell to Smith 6-0, 6-09 in the opening round.

Towanda's Kevin Blackman and Andrew Nadas of Liberty each fell in the preliminary round.