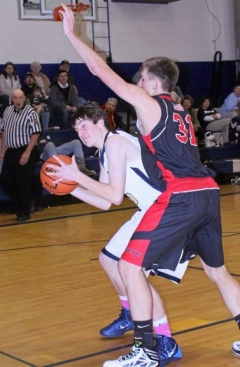 The Towanda Black Knights got 26 points from Noah Huff as they picked up a 60-54 win over Wellsboro in a key NTL large-school matchup on Wednesday.

Towanda trailed 27-24 at the half, but outscored Wellsboro 17-10 in the third to get the victory.

Huff scored 20 of his game-high 26 in the second half for the Black Knights, including 12 in the fourth quarter.

David Rodenhizer had nine for the Black Knights and Noah Wheeler and Bailey Potter each finished with seven for Towanda.

Lij Griffin had six for Towanda in the win and Nick Place had three, while Dylan Bates had two.

Rodenhizer and Wheeler each had five boards and Huff had four assists, while Potter had two steals.

All five Wellsboro starters scored in double figures in the loss.

Michael Pietropola had 12 for Wellsboro and Kieron Smethers and Joey Doganiero had 11, while Dawson Prough and Dylan Prough had 10 each.

Smethers had a double-double with 10 boards and Pietropola had six rebounds and Dylan and Dawson Prough each finished with five rebounds, while Doganiero had four steals.

The Trojans jumped out to a 16-5 lead after one quarter on their way to the win.

Jed Wright had 11 assists, six steals and eight points and Evan Polly had 20 points for the Trojans.

Brady Bourne had four points for Troy and Gage Burns and Thomas Swain each had two, while Jared Murray had one.

Reeves had seven boards for Troy.

Williamson won the JV game 38-36. Colin Heilburn led Williamson with 16, while Curtis Roupp had 10 for Troy.

Troy is at Wyalusing on Friday.

The Wyalusing Rams led by 12 after the third quarter, but the Wildcats limited the Rams to one point in the fourth to come away with the win.

Athens was led by Brandon Fauver with 19 and Dan Moyer and Tyler Forbes each had nine in the game.

Ryan Segar had eight for the Wildcats and Joe Moyer and Jarrett Priester finished with two points each, while Zane Vargason had one for Athens.

Dan Moyer had 10 boards and three assists and Forbes had six boards, two assists and four steals, while Segar had five steals.

Wyalusing was led by Dylan Bulick with 10 points and Cody Pickett finished with nine in the game.

Kyle Tinna had seven for the Rams and Matt Woodruff finished with six points.

Theron Millard had three for Wyalusing and Keshon Gardner, Ridge Williams and Collin Fassett finished with two points each.

Athens won the JV game 39-35. Austin Lane and Austin Lister had eight each for Athens in the game.

Canton led 25-24 at the half, but the Indians outscored the Warriors 14-6 in the third to get the win.

Dakota Corwin led CV with 20 and Tyler Melko had 12 in the game.

Josh Nudd had nine for the Indians and Brandon McLean had seven while Nate Bonham finished with four points.

Mason Moore led Canton with 23 and Jesse Lattimer had 13.

Kerry Moon had six for Canton and Christian Tharen had three and Ridge Moore and Dylan Fleet finished with two points each in the game.

A 20-point second quarter gave Northeast Bradford the lead at the half, but North Penn outscored NEB 19-8 in the fourth to get the victory.

Dayton Wood had a double-double to lead North Penn with 15 and 12 rebounds and Dylan Rudinski had 12 in the game.

Levi Christman had 10 and Kaynen Arredondo and Cody Crum each finished with eight.

Ryan Bogaczyk had four points and six assists for the Panthers.

Northeast Bradford was led by Jordan Goodwin who had a double-double with 20 points and 13 rebounds and Levi Upham had eight points and eight rebounds.

Andy Seeley had six points in the game.

J.P. Shaw had a career-high 24 points along with six boards and two blocks to lead the Tigers to the victory.

Mansfield trailed 12-10 after one quarter but scored 23 in the second quarter.

Brady Andrews had eight for Mansfield and Chandler Correll had seven points and five rebounds.

Ryan Campbell had six and Bo Burleigh and Jarrod Burd each had five, with Burd adding five boards.

Bryce Zaparzynski and Brock Burleigh each had two points and Joel Whittecker had one.

Liberty was led by Cody Schmouder with 12 and Dalton Litzeman had nine, while Kenny Kreger and J.J. Walker finished with five each.

Harley Kilmer, Cody Fritz, and Dillon Ford had three each for Liberty and Sergey June had one point.

Mansfield is at Sayre on Friday.

WAVERLY, N.Y. - Whitney Point outscored Waverly 33-14 in the second and third quarters to pick up the victory on Tuesday.

Peyton Miller had nine for the Wolverines and Dylan Perry had seven in the game.

Kyle Kinsley had six for Waverly and Alex Uhl had five, while Tanner Cantrell, Alex Volpe and Hunter Bodine had three each.

Garrett Sutryk finished with two points and Ryan McFarland had one point.

McFarland and Tim Sutton each had four boards.

Jonas McCaig had 19 points to lead four Crusaders in double figures in the victory. Notre Dame scored 20 or more points in each of the last three quarters, including 25 in the second, to get the win.

Darius Garvin had 17 points and Nate Niles and Hunter Thomas each finished with 12 points.

Parker May had nine for Notre Dame and Tom Agan had eight points.

Derrick Marshall finished with four for Notre Dame and Joe Prunier had three, while Zach Jones had two points.

Garvin had eight steals, a block and five assists and Agan had seven boards, while Thomas had three assists and four steals.

Notre Dame is at Tioga on Friday.