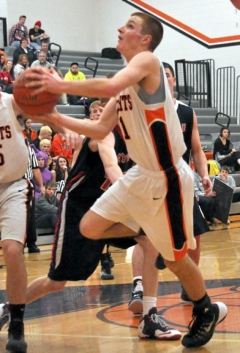 TOWANDA - The Black Knights fell behind 16-5 after one quarter and trailed by 12 in the second, but slowly Towanda fought back.

Towanda got within five at the half and outscored the Redskins 18-9 in the third on their way to a 54-41 victory.

Towanda fought all the way back in the third and took a seven-point lead late before Sayre's Nate Williams hit a long running three at the buzzer to end the quarter at 43-39 Towanda.

Sayre got within two in the fourth quarter, but Towanda was able to hold on for the win.

"We couldn't hit a shot in the first, it looked like we hadn't played in a week and we hadn't," Towanda coach Ryan Napp said. "We didn't start the second half great either, getting down like nine, but then we made a nice run and finally made some threes."

For the Black Knights it's a good confidence booster before districts to see they can battle back.

"It's always good to know we can win a close game down the stretch," Napp said.

In the second half Towanda got threes from a number of players as David Rodenhizer, Noah Huff, Noah Wheeler and Nick Place all had threes in the half.

"With our team what is so special is we have a number of different people that can step up," Napp said. "Wheeler made a huge three to get us going and Brad (Sparbanie) played great defense on Nate (Williams). Garrrett (Mosier) kept us alive in the first half.

Rodenhizer had 22 to lead the Black Knights and Huff had 18.

Mosier had six, all in the first half, and Place and Wheeler had three each, while Lij Griffin finished with two.

Rodenhizer had two assists and three boards, Huff had two steals and four assists, Bailey Potter had six boards and Griffin had six boards, while Sparbanie had five boards.

Williams led Sayre with 21 and Marshall Higley had 12.

Seth Murrelle had eight for Sayre and Joey Galizia had six, while Tyler Eaton and Nick Sweet had two each.

MANSFIELD - The Hornets had four players score in double figures as they rolled over their rivals in the NTL Showdown semi-final game Friday.

Wellsboro jumped out to a 13-7 first quarter lead then pushed it to 29-18 at the half. The Tigers were still in striking distance after three, down 49-34, but a 29-14 fourth quarter in favor of the Hornets put the game away for them.

Kieron Smethers had a double-double for 13 points and 12 rebounds while blocking three shots. Michael Pietropola and Dawson Prough had 20 points each with Pietropola grabbing seven boards.

Burleigh had nine boards and two assists and Shaw had seven boards.

Wellsboro will face Towanda in the title game at Mansfield University today with an 8:30 p.m. tip off. Mansfield will take on Sayre at the Troy Commons Building with a 2:30 p.m. start.