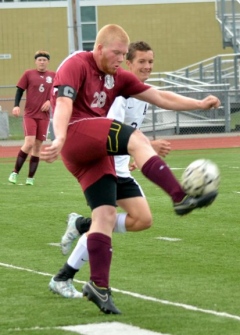 The Wellsboro Green Hornets got a goal from Josiah Hill at 84:01 of overtime to edge Towanda 1-0 on Wednesday in boys' soccer action.

Hill scored the game winner off an assist from Brieux Thibaut.

"The boys were brilliant tonight in the defensive and midfield thirds of the field," Wellsboro coach John Shaffer said. "We were able to keep the ball on the Towanda half a majority of the game. In the final third we struggled with only 12 of 32 shots on goal. I want to congratulate Towanda on their progress. They played hard and were tactically well set up, they are growing as a program.

"With the win we are qualified for districts so now we have roughly two weeks to get healthy and ready to make another run."

Wellsboro had 32 shots and eight corners and Towanda had eight shots and one corner kick.

Devin Patel had 11 saves for Towanda and Jake Mitchell had four saves for Wellsboro.

ATHENS - The Wildcats got a pair of goals and an assist from Ryan Segar and Shane Colegrove had a goal and two assists in the win.

After a scoreless first half Colegrove started the scoring at 33:29 of the second half off a Carlos Cardona assist.

At 22:35 Segar scored off a Colegrove assist.

Segar scored again off another Colegrove assist at 21:47 and at 19:30 Ethan Lane scored off a Segar assist.

Athens had 17 shots and 10 corners and NEB had one shot and no corners. Nick Vosburgh had a save for Athens and Mason Merrill finished with 13 saves for NEB.

Athens is at Troy at 5 p.m. on Saturday.

Jon Daley put Williamson up 1-0 in the 19th minute on a penalty kick, before Payden Bice tied things for Northern Potter in the 36th minute.

Matt Learn scored the game winner in the 39th minute for the Warriors.

"Conditions at tonight's game were harsh," Williamson coach Mark Gee said. "It was extremely windy so the team with the wind to their back controlled the half. We had the wind in the first half and played a very well, probably our best, passing game of the year. Daley scored on a PK then Bice from Northern Potter scored a great goal beating one of our defenders and placed a great shot in the side of the netting to even the game.

"Matt Learn scored the game winner with 30 seconds left in the half with a rocket from about 35 yards out. The second half playing into the wind we just bunkered down and played very defensively."

Galeton jumped out to a 3-0 lead and held on for the victory on Wednesday.

Jake Batterson scored at 36:03 off an Emilio Martinez assist and at 6:20 Martinez scored off a John Parsell assist to make it 2-0 at the half.

At 36:44 of the second half Cooper Sunderlin put Galeton up 3-0 before Collin Binford tried to rally Troy back.

Galeton had eight shots and four corners and Troy had seven shots and one corner kick.

Galeton is at Liberty on Saturday.

The Tigers are closing in on their first ever winning season after the victory Wednesday.

The win moves Tioga to 6-4-1 and a win Friday locks them into their first ever winning season.

"I love playing games against Candor," Tioga coach Jim Howey said. "They are a class program. They play a hard-nosed, physical brand of soccer and are tenacious until the very end of the game. We mirror that tenacity and our skill play was able to offset their efforts. Both teams were plagued by subpar officiating. It was a total team effort and display.

"Jake Evanek and the defense did an excellent job of limiting the long ball play attempts and the midfield decidedly took ownership of the middle of the field and our attack was primarily from the wing to the box. We played a full 80 minutes of solid technique and tactics. Friday we have the opportunity to get in the history books here at Tioga."

Adam Nichols scored for Candor with 28 minutes left in the game to make it 2-1 before Adam Layman scored with nine minutes left for Tioga off a Josh Welch assist.

Tioga had 19 shots and 11 corners and Candor had six shots and one corner kick.

The Crusaders wrapped up the IAC Large School South title and stayed unbeaten on the year with the win.

Aidan Sharma and Kassra Eshraghi had two goals each and Alec Cutler had a goal and two assists.

Notre Dame had 21 shots and nine corners and Watkins Glen had three shots and no corners.

Kyle Johnson and Logan Brimmer scored two goals each and Eli Halperin and Johnny Beecher added goals for Elmira in the victory.