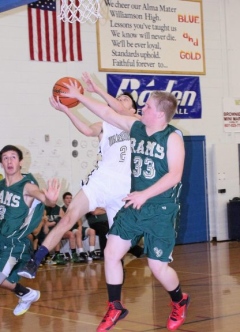 TROY - The Wellsboro boys outscored the Trojans 18-10 in the fourth quarter to rally for a 54-49 victory on Thursday night.

Kieron Smethers led the Green Hornets with 18 points and Dylan Prough had 10 in the game.

Dawson Prough and Joey Doganiero had nine each for Wellsboro and Michael Pietropola had eight.

Jed Wright had a double-double with 12 points and 10 assists in the loss and Evan Polly had 17 while Brandon Mattocks had 15 points. Polly added eight rebounds in the game.

Ryan Reeves and Thomas Swain had two points each for Troy and Gage Burns had one point.

Troy is at Towanda on Saturday.

The Black Knights trailed 13-8 after one quarter, but held Athens to 22 points over the next three quarters to get the victory.

Noah Huff and David Rodenhizer each led the Black Knights with 15 and Noah Wheeler had 10 points.

Garrett Mosier had four points for the Black Knights and Lij Griffin and Nick Place each finished with two points.

Rodenhizer had a double-double, grabbing 11 rebounds and Mosier had five boards and a blocked shot. Rodenhizer and Huff had two assists each and Place had three assists and four boards. Huff had three rebounds and Wheeler had four blocks and three steals, with two boards.

Dan Moyer had a double-double to lead Athens with 21 points and 14 rebounds and Brandon Fauver had six for Athens and Ryan Segar had four points and Jarrett Priester had three points, four boards and three assists and Tyler Forbes had one point and four rebounds.

Athens won the JV game 44-24. Kalen Keathley led Athens with 12 and Nick Innocenzo, Jarod Boardman and Landon Brown all had six for Towanda.

Nate Williams had 24 points to lead the Redskins to the victory on Thursday.

Marshall Higley had 12 for Sayre and Seth Murrell had eight, while Cuyler Kochin had five and Nick Sweet had four. Marcos Velazquez and Marshall Felt each had two for Sayre.

Higley had a double-double with 10 boards and Kochin had nine boards, while Williams had eight rebounds and Joey Galizia had five boards.

North Penn was led by Dayton Wood with 14 and Cody Crum and Brad Brubaker each finished with 11 points.

Levi Kristman had four for North Penn and Kaynen Arredondo and Dylan Rudinski had two points each in the game.

Liberty outscored the Warriors 29-12 in the second and third quarters to get the win.

Cody Schmouder led Liberty with 14 and J.J. Walker had eight in the victory.

Cody Fritz had six for Liberty and Sergey June, Dillon Ford and Harley Kilmer each had four, while Dalton Litzelman finished with two points.

Tim Bassett had 14 to lead Canton and Tre Sawtell and Jesse Lattimer each had four points, while Christian Thoren and Mason Moore had two points each.

Tyler Melko had 19 and Josh Nudd finished with 13 on 11-for-13 shooting from the foul line, to lead the Indians to the win.

Dakota Corwin had eight and Nate Bonham had four, while Ryan Freeman and Brandon McLean had two points each.

Northeast Bradford was led by Jordan Goodwin with 17 points, nine boards and three blocks and Tommy Rought had six points, while Garrett Smith and Elijah Arias had four points apiece and Austin Senn-Bishop had three points.

Upham had six boards and three assists and Arias had three steals.

The Warriors had four players in double figures in the win.

Troy Adriance led Williamson with 18 and Josh Bradbury had 14, while Nick Cevette had 12 and Chris Davis finished with 11 points. Jon Daily finished with five in the win.

Keshon Gardner had five for Wyalusing and Matt Woodruff and Cody Pickett each finished with three points.

Devin Carr, Teron Millard and Kyle Tinna had one point each.

The Wolverines were held to nine first-half points in the loss.

Dylan Perry led Waverly with 14 and Alex Volpe had eight, while Ryan McFarland finished with six in the loss.

Alex Volpe had three points and Garrett Sutryk had two for Waverly.

Hunter Bodine had five boards for Waverly and Sutryk had three steals, while Volpe had two assists.

The Wolverines are at Newark Valley on Tuesday.

Darius Garvin had 26 points and eight steals to lead the Crusaders to the victory on Thursday.

Tom Agan had 11 points and eight boards for Notre Dame and Hunter Thomas had 10 points and four assists in the win.

Jonas McCaig had seven points for the Crusaders and Derek Marshall finished with four points.

Notre Dame won the JV game 58-50 with Terryl Garner leading the Crusaders with 10.

Notre Dame is at Edison on Tuesday for a boys and girls varsity doubleheader with the girls starting at 5:30 and the boys to follow.