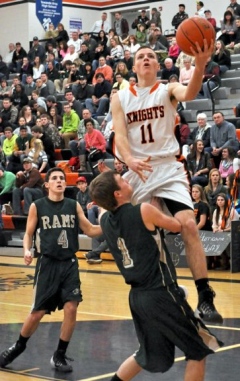 Nate Williams scored a season-high 40 points to lead the Sayre boys to a 60-44 win over Cowanesque Valley on Wednesday night.

The total is the most any player has scored in the region this year.

Williams had a double-double, adding 10 boards, along with two assists and two steals. He shot 16-for-30 from the field in the win.

Murrelle had seven assists for Sayre and Sweet had four assists. Higley had 12 boards and a blocked shot, while Cuyler Kochin had five rebounds.

Bryant Painter and Josh Nudd each led CV with 14 points.

Tyler Melko had six for CV and Brandon McLean and Dakota Corwin had four each, while Nate Bonham finished with two points in the game.

The Tigers clinched a spot in districts with the victory on Wednesday night.

Chandler Correll had 10 rebounds, five steals, three assists and six points for the Tigers and Bryce Zaparzynski had nine points, while Brady Andrews had seven and J.P. Shaw had six points.

Jordan Williams had two for Mansfield and Brock Burleigh had one point and four boards.

Canton was led by Mason Moore with 13 and Jesse Lattimer had nine, while Dylan Fleet finished with seven.

Ridge Moore and Christian Thoren each had five for Canton and Trey Sawtel had four, while Kerry Moon finished with two points.

Mansfield won the JV game 79-29 behind 35 points from Williams.

Liberty won its fourth straight game, outscoring NEB 27-16 in the fourth quarter to pick up the win on Wednesday night.

Cody Schmouder had 26 points to lead Liberty to the win and J.J. Walker and Cody Fritz each had 13, with Walker hitting four threes in the game.

Dillon Ford had seven for Liberty and Harley Kilmer and Dalton Litzelman each finished with four points.

Jordan Goodwin led NEB with 18 points and 17 boards and Levi Upham had a career-high 12 with seven boards.

Garrett Smith had eight points, six assists and three steals and Elijah Arias had seven points and seven rebounds, while Andy Seeley had six points and Nik Geiser and Austin Senn-Bishop each had three points.

NEB is at Mansfield on Friday.

11 different players scored for Towanda in the victory on Wednesday night.

Noah Huff led the Black Knights with 14 and Noah Wheeler had 13.

David Rodenhizer had eight for Towanda and Tristan James, Lij Griffin, Brad Sparbanie, Garrett Mosier and Mitchell Jenkins all had six points in the win.

Bailey Potter had three for Towanda and Nick Innocenzo and Jarod Boardman finished with two points each.

Sparbanie had four boards to lead Towanda and Huff and Wheeler each had two steals, while Rodenhizer had three assists and Huff had two assists.

Wyalusing was led by Keshon Gardner with 12 and Matt Woodruff and Devon Carr had three points each.

Ridge Williams, Dylan Bulick and Kyle Tinna each had two points and Theron Millard and Brad Fassett had one point apiece for the Rams.

Towanda won the JV game 46-41. Boardman led Towanda with 12 and Landon Brown and Mitchell Shoemaker each had 10. Wyalusing was led by Carr with 17 and Hunter Brewer had 10.

Wyalusing is at Elk Lake on Friday.

Wellsboro led by just three at the half, but outscored the Warriors 27-13 in the third quarter to pull away for the win.

Michael Pietropola led the Green Hornets with 22 and Joey Doganiero had 17, while Kieron Smethers had 15 in the victory and Dylan Prough finished with eight points.

Williamson was led by Troy Adriance with 19 and Josh Bradbury had 10 for the Warriors.

Nick Cevette had five, Kyle Haight had four and Jon Daley and Chris Davis finished with two each for Williamson.

The Griffins got 16 points and 11 rebounds from Conner Wylie in the win on Wednesday.

Sullivan County trailed 9-6 after one quarter, but outscored CMVT 36-20 the next two quarters.

Bob Polcrack had 10 in the win and Jordan Beinlich had eight, while Miguel Rodriguez finished with two points.

Sullivan is at Muncy on Saturday.

Mataya McPherson had four for Galeton and April Howell and Cortney Parsell finished with two points each.

Otto Eldred was led by Mychaela Jones with 25 points.

The Griffins were outscored 30-11 in the first half of the loss.

Sullivan was led by Torie Shultz with 15 points and Ashley Faus had six in the loss.

Katie Beinlich had three for the Griffins and Kelly Kramer and Bethany Lambert each had two points.

South got 20 from Jen Jackson and 19 from Anna Steer.