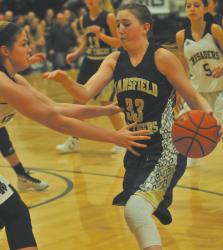 ELMIRA, N.Y. - North Penn-Mansfield overcame a slow start and held off a Notre Dame rally late to win 37-35 in the opening round of the Sue DeFilippo Division of the Holiday Inn Classic.

Notre Dame takes on Edison at 10 a.m. this morning.

Tied at 10-10 after the first quarter the Tigers held Notre Dame to three points in the second to take a 19-13 lead at the half.

The Crusaders came back in the third, out scoring the Tigers 12-10 and even out scored them 10-8 in the fourth but couldn't complete the rally.

Neither team shot well in the defensive battle as NPM was 33% from the floor while Notre Dame was 27%.

Both teams combined for 4-for-33 from beyond the arc.

Yet there were only had 11 total turnovers in the contest.