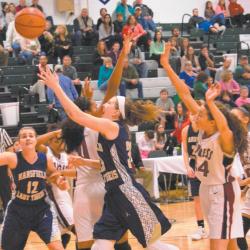 ELMIRA, N.Y. - Home standing Elmira jumped out to a big lead and pulled past North Penn-Mansfield 75-28 in the title game of the Sue DeFilippo Division-II girls’ bracket of the Holiday Inn Classic Wednesday.

The Lady Express led 24-6 after the first quarter thanks to a defense that forced 12 Tiger turnovers in the game. They also held NPM’s shooting to 21 percent while shooting 55 percent themselves.

Ali Hillson had 12 points to lead the Tigers while Lauren Smith had nine points and six boards. Kristina Buchanan rounds out the North Penn-Mansfield scoring with seven points while also grabbing five boards.

Sam Gentile had 31 points to lead the Trojans to the victory on Wednesday.

Carla Proto had six points and Madison McClelland had four in the win.

Marissa Bulkley, Autumn Gilbert and Caitlyn Hoffmann each had two points, while Roxanne Kinglsey had one point.

Gentile had a double-double adding 20 boards, with an assist and a steal and Bulkley had five boards and two steals, while Proto had 13 boards and a block.

McClelland had four boards and three steals, Hoffman had a block and five boards and Kingsley had six boards, an assist, a steal and a block.

"We took a big step forward today, the improvement up and down the lineup is evident," Troy coach Brian Burchard said. "So happy to get our first win as a team, and my first win as a head coach. It was a total team effort today. I am so proud of these Lady Trojans."

The Griffins trailed 17-8 after one quarter and 27-19 at the half, but outscored the Spartans 33-19 in the second half of the win.

Kati Beinlich had 16 points and 15 rebounds, with three steals. Stef Kramer had 10 points for the Griffins and Sarah Parrish had eight points, while Bethany Weinhardt, Tori Schultz and Ashley Faus had six points each.

Parrish had seven boards and four blocks and Schultz, Weinhardt and Faus combined for seven steals.

The Griffins are 4-3 on the year and they are at Bucktail on Saturday.