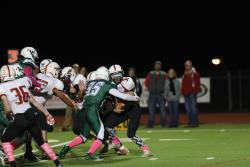 The Wellsboro Green Hornets stayed unbeaten on the year with a 62-6 win over Montgomery on Friday night.

Wellsboro scored 36 second-quarter points on their way to the victory.

In the first quarter Dalton Prough started the scoring at 9:01 as he picked off a pass and ran it back 65 yards for the score. Jacob Singer hit the extra point and it was 7-0.

At 9:19 Brody Coolidge blocked a punt and ran it back 28 yards for the score after a big block by Caleb Sinkler. Singer hit the kick and it was 29-0.

Brent English scored on a 5-yard run with 5:52 left in the game to make it 62-0. Montgomery scored with 2:24 left when Keith Habersham caught a 17-yard touchdown from Brayden Strouse and the two-point try failed.

Moser had 109 yards on four carries and Hauser ran for 77 yards on seven carries. Hosey ran for 68 yards on one carry and Coolidge ran 36 yards on three carries.

Parker Jones had nine tackles, with a sack and Collin Pietropola had eight tackles and a fumble recovery.

Strouse threw for 28 yards for Montgomery and Habersham ran for 53 yards on two carries.