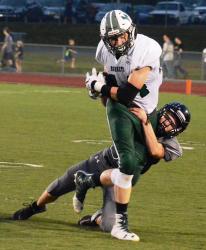 Playing without standout Kalen Keathley, Athens put a couple of dents in that record, but Wellsboro walked away with a 28-14 win, virtually ending any thoughts of a repeat title for the Wildcats.

"We kept making mistakes. We just have to find out character. A couple big plays in the first half hurt us," said Athens coach Jack Young. "It's a tough one, but I'll give our kids credit. They hung in there and fought until the very end and got some points on the board, but we have to go back to work.

"It's a gut check and some pride time now and I know this group will come back to work."

The game couldn't have started out worse for Wellsboro, which had two penalties on successive opening kickoffs.

Once the Wildcats got the ball, Athens marched the ball down the field, picking up 40 yards from the Wildcats' 34-yard line to Wellsboro's 26 before giving it up on downs.

After an exchange of punts, Wellsboro got the ball at Athens' 39-yard line. The first play lost three but the second was a 42-yard TD pass from Quinn Henry to Dalton Prough. Prough was defended on the play — Athens got a 15-yard interference penalty that was enforced on the kickoff — but the Henry-to-Prough hookup produced 66 yards in the first half.

Nic Ingerick nailed the first of four successful PAT kicks and Wellsboro was up 7-0 with 3:20 to go in the first quarter.

Athens started at its 16-yard line and, with a couple penalties, lost a yard.

The Hornets had a short field again, starting at their 41-yard line. Wellsboro wasn't immune to penalties either, but after a 10-yard Henry run and a 27-yard connection between Henry and Prough, Henry went up the middle and darted to the left sideline for a 22-yard TD run with 11:16 to go in the half.

Athens had a couple of opportunities to get on the board before the half. The first, which started at the Athens 42-yard line, started out going backwards, before gaining ground. The Wildcats got as far as the Wellsboro 25 before back-to-back sacks of Justin Reagan pushed the team back again.

Athens' Kaden Rude gave his team another crack when he picked off a Henry pass and returned it to the Hornets' 32-yard line. Athens again started off with a penalty, but still got to Wellsboro's 12-yard line. With a second-and two but time running out in the half, three straight passes fell incomplete and the chance passed.

"The penalties were downright ugly all game long," said Young. "We have a lot of things to improve upon and that's not excluding our health."

Wellsboro got the ball to start the second half. Athens couldn't finish on its opening drive in the first half, but the Hornets did. Starting at their 27-yard line, the Hornets stayed on the turf. Alex Kozuhowski had an 11-yard run and, two plays later, Chase Moser ripped off a 46-yard run to Athens' 10-yard line. Four plays later, on fourth-and-goal from the three, Henry ran for his second TD of the night for a 21-0 lead with 8:03 left in the third.

After Athens' Reagan picked off Henry at the Athens 35 two series later, Wellsboro's final score came from its defense. Parker Jones stripped Reagan on a run and Brody Coolidge returned the fumble from Athens' 42-yard line to the Wildcats' 4-yard line. Kuzuhowski scored on the next snap.

After a couple punts and with starters still in on both sides, Athens' offense finally started to click. Starting out at Wellsboro's 43, Athens took advantage of a 15-yard penalty and some hard running by Zack Jayne and Nate Bradley to get to Wellsboro's 12-yard line. After three runs gained nine yards, Jayne got the call and went around the left side to pay dirt. Shane Colegrove hit the first of two PAT kicks and Athens was on the board with 7:23 left in the game.

After a short Wellsboro punt, Athens started at its 38-yard line with 5:55 left. After Payton Lewis and Bradley produced double-digit-yard runs to get the Wildcats inside the 20-yard line, they got a little help from the Hornets in the form of a penalty. Three plays later, Jayne blasted in from a yard out with 2:17 to play.

Wellsboro was able to run out the clock from there to get the win.

For the game, Wellsboro only managed 282 yards from scrimmage, led by Henry's 78 rushing yards and 98 yards passing.

Jayne led Athens, which was held to 192 yards from scrimmage, with 81 yards on 19 runs and Bradley pounded his way for 46 more yards on seven runs.